Depending on the type of output, supervised learning problems are either problems of regression or problems of classification. If the output takes a continuous range of values, it is a regression problem. Using Ohm's Law as an example, a regression could be performed with voltage as input and current as an output. The regression would find the functional relationship between voltage and current to be

Classification problems are those for which the output will be an element from a discrete set of labels. Classification is very common for machine learning applications. In facial recognition, for instance, a picture of a person's face would be the input, and the output label would be that person's name. The input would be represented by a large multidimensional vector whose elements represent pixels in the picture.

to be the vector space of all possible inputs, and

to be the vector space of all possible outputs. Statistical learning theory takes the perspective that there is some unknown probability distribution over the product space

, i.e. there exists some unknown

. The training set is made up of

samples from this probability distribution, and is notated

is an input vector from the training data, and

is the output that corresponds to it.

In this formalism, the inference problem consists of finding a function

be a space of functions

be the loss function, a metric for the difference between the predicted value

and the actual value

. The is defined to be

that can be chosen, is given by the

Because the probability distribution

is unknown, a proxy measure for the expected risk must be used. This measure is based on the training set, a sample from this unknown probability distribution. It is called the

A learning algorithm that chooses the function

Different loss functions are used depending on whether the problem is one of regression or one of classification.

The absolute value loss (also known as the L1-norm) is also sometimes used:

is the Heaviside step function. 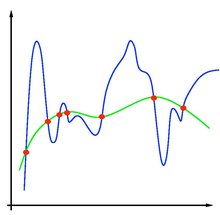 In machine learning problems, a major problem that arises is that of overfitting. Because learning is a prediction problem, the goal is not to find a function that most closely fits the (previously observed) data, but to find one that will most accurately predict output from future input. Empirical risk minimization runs this risk of overfitting: finding a function that matches the data exactly but does not predict future output well.

Overfitting is symptomatic of unstable solutions; a small perturbation in the training set data would cause a large variation in the learned function. It can be shown that if the stability for the solution can be guaranteed, generalization and consistency are guaranteed as well.[6][7] Regularization can solve the overfitting problem and give the problem stability.

Regularization can be accomplished by restricting the hypothesis space

. A common example would be restricting

to linear functions: this can be seen as a reduction to the standard problem of linear regression.

could also be restricted to polynomial of degree

, exponentials, or bounded functions on L1. Restriction of the hypothesis space avoids overfitting because the form of the potential functions are limited, and so does not allow for the choice of a function that gives empirical risk arbitrarily close to zero.

This website uses cookies to improve your experience while you navigate through the website. Out of these, the cookies that are categorized as necessary are stored on your browser as they are essential for the working of basic functionalities of the website. We also use third-party cookies that help us analyze and understand how you use this website. These cookies will be stored in your browser only with your consent. You also have the option to opt-out of these cookies. But opting out of some of these cookies may affect your browsing experience.
Necessary Always Enabled
Necessary cookies are absolutely essential for the website to function properly. This category only includes cookies that ensures basic functionalities and security features of the website. These cookies do not store any personal information.
Non-necessary
Any cookies that may not be particularly necessary for the website to function and is used specifically to collect user personal data via analytics, ads, other embedded contents are termed as non-necessary cookies. It is mandatory to procure user consent prior to running these cookies on your website.
SAVE & ACCEPT